Wondering what did men wear in the 60s? Did you know that by 1965 almost half of the US population was under the age of 25? Due to the rise of social injustice from generations gone by, the young men and women of that time did everything that they could to bring change. The evolutionary change can be reflected in men’s clothing from the 1960s – from the unforgettable bohemian style to the stunning mod look – 1960’s fashion can be described in two words “bold” and “unique.” Read on to learn more about what did men wear in the 60s and the best stylish dress for men in the 60s.

When you think of what did men wear in the 60s, you probably think of tie-dye shirts and bell-bottom pants. However, men’s fashion in the 1960s wasn’t limited to just that – from memories of Woodstock to hippie clichés to the mod-casual and Ivy League Style clothing – the dynamic decade had a lot to offer. 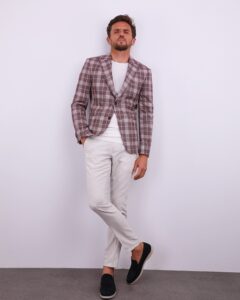 Next in line are the preppy blazers of that time. Being considered one of the best stylish dress for men in the 60s, the preppy look was more than just penny loafers and varsity sweaters. The casual clothing style reached new heights when men started pairing their solid-colored, plain blazers with a white shirt, trousers, tie, and the forever-in-style loafers. Inspired by this, another look that stood the test of time was wearing a semi-formal polo shirt with a cardigan tied around the shoulders. However, when it came to choosing the perfect pair of bottoms, men in the 1960s usually paired most of their shirts with khakis, chinos, and loafers.

Succeeding in evolving the ultra-conservative style of the 1950s, the modernists of the 1960s took fashion in a new direction. Being considered the best stylish dress for men in the 60s; the Mod-style comprises narrowly tailored pants and slim-fitting suits paired with turtle necks or dress shirts. The hippie style was the exact opposite; it was all about bright colors, dazzling accessories, and patterns of all types.

Although men’s fashion from the 1960s is almost fifty years old, even today, some of these clothing styles hold a firm place in our hearts as every new style is a modernized version of 1960’s fashion.

What Did Men Wear in the 60s | Shoe Edition 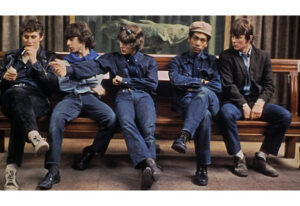 shoe styles from that time can be defined in three words – funky, full of variety, and distinct. From monk strap shoes and Chelsea boots to Oxfords and retro sneakers, to the chukka boots and leather sandals, shoes of the 1960s had it all. With a carefree attitude and free spirit, the people of the 1960s were becoming more liberated, so when it came to shoes, they started experimenting with new looks.

The businessmen of the 1960s always preferred the safer choice of Oxfords and brogues to complete their formal look. However, with the introduction of moccasins, even conservative men started preferring comfort with style.

Boots were considered appealing and completed the look when it came to the best stylish dresses for men in the 60s (Popular men wear on the 1960s), as everyone from the Beatles to rock stars were wearing different editions and styles. Moreover, with the penny loafers never going out of style, men also started wearing leather sandals and retro sneakers for casual yet stylish attire.

What Did Men Wear in the 60s | Accessories Edition

Any item that can add style, color, and class to a particular outfit is called an accessory. Similar to clothes and shoes, even the way men wore accessories changed when talking about what did men wear in the 60s. Whether casual, formal, or semi-formal, all the best stylish dress for men in the 60s demanded stylish accessories to complete the attire.

For example, when talking about formal business attire, men preferred wearing a fitted vest and fedoras for a classy look. When it comes to casual preppy styles, men redefined their attire with a tie and watch. As for mod-style, dark, black sunglasses were considered the signature touch.

However, for the all-so-funky hippie look, men went above and beyond when it came to accessorizing themselves. From golden and silver chains to bold rings and funky neck scarves, men wore it all. Drawing a fine line between the hippies and beatniks of the 60s, the beatniks wore berets and dark sunglasses for a more posh look.

Looking back, it’s surprising to see how the style of the 1960s still has a major influence on today’s men’s fashion. While no one’s encouraging you to go full retro, we do believe that having some of the quintessential pieces will complete your wardrobe. To get the best stylish dress for men in the 60s, visit us right away.

Your cart is empty.